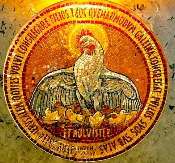 On Wings of Love

Halfway down the Mount of Olives, overlooking Jerusalem, is a little church called Dominus Flevit (‘The Lord Wept’). It’s shaped like a teardrop, and it marks the place where Jesus stopped and wept on Palm Sunday, on his way into Jerusalem (Lk.19:41).

In front of the altar there’s a circular mosaic of a mother hen gathering her chicks under her wings. And around it in Latin are Jesus’ words from Luke’s Gospel: ‘Jerusalem, Jerusalem, the city that kills the prophets and stones those who are sent to it! How often have I desired to gather your children together as a hen gathers her brood under her wings, and you were not willing!’ (Lk.13:34).

These words, ‘you were not willing’, are set in a pool of red below the chicks.

In today’s Gospel, Jesus enters Jerusalem, acutely aware of its history of rejecting God’s messengers. He knows that soon it will be his turn, but he’s not angry; he’s just profoundly sad. He wants to gather his people and protect them, like a hen protects its chicks.

Yet they ‘are not willing’.

Just for a moment, though, it does looks promising as Jesus rides into the city on a donkey and the people welcome him as a great hero. They wave their palms about and they cheer him on, and the air is filled with joy.

But soon afterwards, the very same people turn on Jesus. They are so fickle.

Jesus is spat upon, beaten, whipped and mocked. He’s hit on the head and given a crown of thorns. He’s forced to carry that awful Cross. His clothes are stolen. Huge nails pierce his hands and feet. He’s given vinegar to drink. He’s left for dead and, just to make sure, he is speared.

They don’t want to gather under his protective wings.

They would rather live shallow, worldly lives. So, Jesus is crucified.

But so many of us refuse to change. We much prefer to live worldly lives.

That’s why Jesus is still being mocked, beaten and crucified today.

Recently, I read about a farmer inspecting his property after a bushfire. As he searched through the rubble, he found a dead hen, with her wings outstretched. Her feathers had been scorched by smoke and flames.

When he removed her body, four little chicks came out from underneath, chirping and cheeping.

That hen had sacrificed herself, protecting her children.

That’s what Jesus did for us on the Cross. As the psalmist promised, ‘He will cover you with his feathers, and under his wings you will find refuge’ (Ps.91:4).

But are we willing?