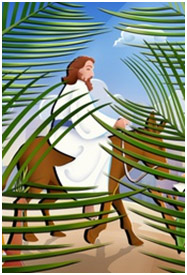 On the Passing Parade

One remarkable figure in today’s Palm Sunday Gospel that’s typically overlooked is the donkey – the simple, ordinary, humble donkey.  It’s easy to miss this animal but its presence says so much.

2000 years ago, a worldly king would never have ridden a donkey.  He’d have chosen a mighty wheeled vehicle, perhaps a chariot, drawn by magnificent horses.

But Jesus is different.  In our second reading, St Paul tells us that although he was God, Jesus didn’t seek to be treated as God.  Rather, he emptied himself, taking the form of a slave … he humbled himself. So he chose a donkey.

Riding his donkey, Jesus fulfilled Zechariah’s 500 year old prophecy:  ‘Shout aloud, O daughter Jerusalem!  Lo, your king comes to you; triumphant and victorious is he, humble and riding on a donkey … and he shall command peace to the nations …’ (Zech.9:9).

Jesus went to Jerusalem for the Passover celebrations.  He approached the city from Jericho and that means he entered through the East Gate.  Seeing him, the crowd got excited and shouted. ‘Hosanna to the Son of David!’  Jesus was their hero – their long-awaited Messiah.

Now, Passover is one of the great Jewish celebrations.  It commemorates the release of the ancient Israelites from slavery in Egypt.  Jesus went there every year.  The American scholar Ed Parish Sanders estimates that up to 500,000 pilgrims went to Jerusalem every year for these celebrations. The numbers were huge.

You can just imagine the Roman procession. It was spectacular, with horses, chariots, cavalry, foot soldiers, helmets, armour, weapons, colourful banners and golden eagles held high.  The sound of horses, drums and marching feet echoed through the narrow streets.

This imperial procession was meant to intimidate:  it’s the power of a worldly empire with its false gods.  Its purpose was to demand fear and loyalty.

Jesus’ procession from the east, however, was different.  It was led by a humble man on a donkey, proclaiming the kingdom of God and asking people for love, acceptance and loyalty.

What a contrast!  One parade representing the pride, power and shallow obsessions of the world.  The other representing a new and a remarkable kind of kingdom – one of deep humility, hope, peace and love.  One that so many of us yearn for.

If you look and listen carefully, you’ll notice that both of these parades are continuing today.  And both, in their own way, are calling us.

… one parade represents the pride, power and shallow obsessions of the world. The other represents a new kind of kingdom

The parade that’s all about power and pride (and sadly, false promises, too) is noisy, it’s brash, it’s colourful.  It’s what captures the attention of most people.  It dominates our modern world.

The other is about the extraordinary love of our humble man-God.  It’s quiet.  It’s gentle.  It’s easily overlooked, but it’s always there, gently calling us over.

Which procession are you in?  Which crowd are you following?  If you say you’re following Jesus on his donkey, then I’ll ask – are you really following him?

I ask this because many in the crowd who greeted Jesus as he rode through Jerusalem on the Sunday also demanded his death on the Friday.

Cheering on Sunday, but jeering on Friday.

Hopeful on Sunday, but hateful on Friday.

How shallow and fickle they were.

In these final days before Easter, let’s reflect deeply on what it really means to follow Jesus.

Are we loyal or are we fickle?  Do we truly follow Jesus, or do we pretend to?

Which parade, which crowd, are we really following?